Five great things from May

Depressing news, depressing weather, depressing social media and (for me) depressing face.  I woke up earlier this week to find my face covered in one of the worst outbreaks of dermatitis that I’ve had in a while which I suspect has been brought on due to changing brands of cleanser. (Damn you expensive cleanser that happens to the best one I’ve ever used. Damn you and your lies.) So, as a means of cheering myself up (and in lieu of the fact that I don’t have an exciting recipe to share with all of you 50-or-so readers yet) I thought I’d write a long list of things I’ve been greatly enjoying recently. Some of this involves food, some of this just involves things that indirectly involve food. But hey, it’s my blog and I’ll freestyle if I want to.

I was introduced to Broad City by my excellent friend Bethany, and it’s rapidly become one of my favourite TV shows. While on paper, the concept reads as one which has been done to death (the adventures of two 20-something women in New York who spend their time navigating bad jobs, shit sex and awful flatmates), the difference here is that the two main protagonists are funny, realistic and genuinely like each other.  There’s lots of support, no self loathing and – while they can occasionally come across as being awkward and self obsessed – they’re nowhere near as obnoxious, selfish and grandiose as the characters in similar ‘female focused’ sitcoms. I want to hang out and get wasted with Ilana and Abbi, even if the evening would end up with me smooshing cake in my face or accidentally breaking into the wrong flat. Bonus points also go to Ilana’s super-cute boyfriend Lincoln (shown above) who steals every scene he’s in – a point which was proven when I was watching it on the train to work the other day, and the guy watching it over my shoulder chuckled loudly every time he was on screen. Lincoln, be my boo. 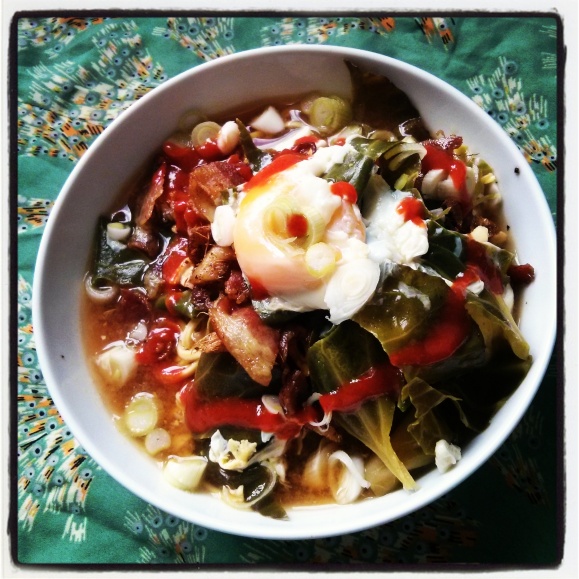 OK, so you can never go wrong with a meal which utilises noodles, crispy bacon and soft poached eggs, but this recipe for Bacon and Egg Ramen from Food 52 is so perfect that it hurts. It requires minimal effort to make, uses ingredients that you probably have lying around your kitchen already and makes a glorious Spring lunch.

It was World Baking Day last Sunday (I know, I didn’t know it was a thing until this year either. The things you learn when you work for a baking brand!) so I decided to pull out the big guns and make Felicity Cloake’s ‘perfect’ Coffee and Walnut cake. While you can never go wrong with a concoction which involves two layers, a vast amount of buttercream and a truly unholy amount of sugar, not all Coffee and Walnut cake recipes are created equal. Thankfully, I can attest to this one being a humdinger – beautifully moist, deliciously decadent and with just enough coffee to put a bit of pep in your step. Mr. McMc took this into his office last week where it was devoured by his colleagues. And when mine looked at the pictures of it I put on Instagram, I was told off for not making another one to bring into work. It’s that good. (It also makes an excellent breakfast if – like me – you’re fond of eating dessert first thing in the morning.) 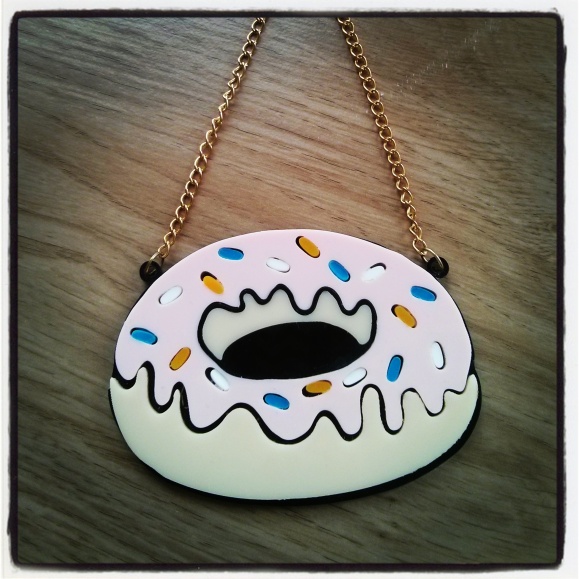 My (incredibly talented) friend Charlotte runs an online jewellery retailer called Black Heart Creatives, and was kind enough to make me this Doughnut Necklace to accompany my Hamburger Queen outfit. Not only does it look good enough to eat, it’s rapidly become my favourite item of jewellery to wear too. (Hey, what fat girl doesn’t love the idea of wearing a massive doughnut around her neck?) Every time I wear it, I get dozens of compliments and a woman even stopped me on the way to the bus stop the other day to comment on how much she loved it.  If you fancy one yourself, I highly recommend checking out the Live Fast Die Yum collection. Honourable mention should also go to their recently launched Palm Bling range too, mostly because I want EVERYTHING IN IT.

I’ve spent most of the past week holed up in (arguably) London’s tiniest flat in Angel. While navigating tiny beds and even tinier showers isn’t everyone’s idea of fun, the fact that it was situated next to some seriously excellent pubs and restaurants more than made up for it. The highlight of my eating expeditions was undoubtedly Little Georgia, a Georgian themed eatery which featured gigantic glasses of deliciously dry red wine, wonderfully friendly waitresses who sneakily topped up my glass for free when no one was looking, and a gloriously crispy skinned poussin smothered in a messy, buttery walnut sauce just made for licking off your fingers. I would have taken pictures, but to be honest, I was too busy gulping down large slices of Khachapuri (aka ‘the world’s best stuffed crust pizza’) – a beautifully soft floury bread which was stuffed with three types of melted cheese. It’s the kind of food a girl has dirty dreams about. I can’t wait for my next visit.

Pop culture, food and gigantic jewellery – that’s what’s been rocking my world this month. How about you? (And if anyone knows a great facial cleanser for the eczema riddled, send it my way would you?)