Strictly speaking, this isn’t really a cobbler, as a cobbler traditionally tends to contain fruit or a pastry crust.  It’s more a self saucing pudding (a terminology which I always imagine being uttered by someone like Fanny Craddock in faux genteel tones) which means you crack through a layer of baked demerara sugar and butterscotch to reveal a steaming ocean of hot whisky-scented chocolate sauce. Why whisky you ask? Well, because when I was making this I discovered that I’d run of vanilla essence, so decided to put a shot of the hard stuff in there instead. And because I believe that most things work better when you stick a shot of spirits inside them. I imagine it would also work quite well with Tia Maria or Kahlua if your tastes run more towards the coffee side of things.

This is not a genteel pudding, or indeed a pudding which can be photographed beautifully and artistically (all of my attempts to take a picture of it in a bowl ended up making it look like a dirty protest.) However, it’s incredibly simple to make, infinitely adaptable (I used butterscotch chips here, but I imagine it would also work very well with sour cherries or bourbon soaked apricots) and – best of all – fantastic to eat. Happy cobblin’. 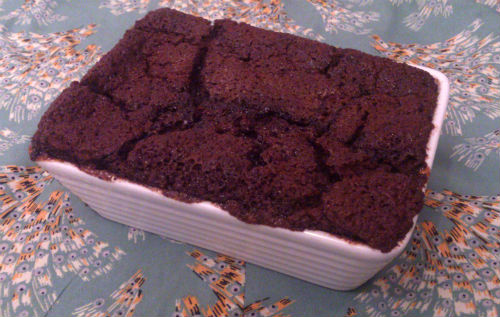 Adapted from The Kitchn 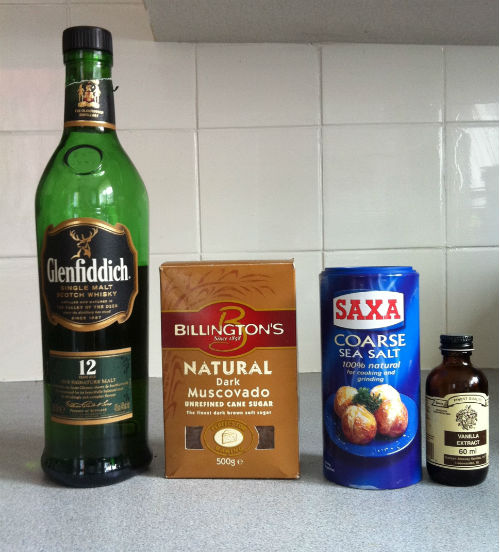 So, picture the scene. It’s a Sunday afternoon, you’re knee deep in freelance work, and you would gladly sell your fiancée in return for a dessert-based-treat. However, you are hindered by the fact that a) there’s no chocolate in the house, b) you only have 10p in your bank account and c) it’s about to piss it down outside. There is only one thing for it. Baby, you’re going to have to improvise. It’s time to make some pudding. 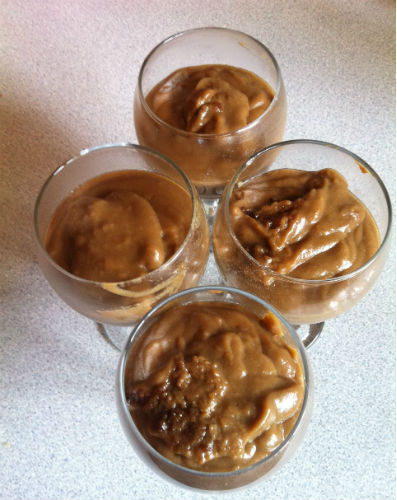 I learnt how to make pudding from scratch earlier this year, and when I did, I realised how man must have felt when he first discovered fire. The fact that you could take some cornflour, milk, eggs and flavourings, and turn them into something spectacular left me gobsmacked. This was magic – cooking alchemy at its finest. Why the hell had no one told me about these before?

The reason for this appears to be, simply, that cornflour puddings are more of an American thing than anything else. After all – when you mention the word ‘pudding’ to an English person, they’ll tend to think of steaming bowls of suet-heavy, currant laden sponge puddings. A cornstarch pudding is more mousse like in texture, sleek, rich and deliciously slippery. No wonder that the first time I ate one, I realised that I had, effectively, made grown up Angel Delight.

As a kid, I adored Angel Delight. I was always fascinated by the fact that you could make something so delicious out of an incongruous beige powder. Its appeal was only heightened by the fact that my family only ever ate it on special occasions – namely when my Dad couldn’t be bothered going to the shops and we had a spare packet of it at the back of our cupboards. Being a sweet toothed seven year old however, the chocolate flavour was always my favourite, and I have fond memories of eating huge bowls of the stuff whilst watching reruns of The Dukes of Hazzard on TV. I’m not sure I could even face eating the stuff nowadays. Much as I adore nostalgia, bowls of chemically sweet gloop just aren’t my bag. Not when I have access to the real thing.

This is a pudding which is ridiculous in every sense of the word. Decadent, rich, and insanely creamy, it is a glorious harmony of vanilla, butter, brown sugar and a shot of whisky for good measure. It’s the kind of dessert you could imagine a 1950s starlet eating in a bubble bath. Or alternatively, you could just eat it in your kitchen, listening to the midnight news on Radio 4 whilst watching a huge thunderstorm ‘water’ your herb garden, as I did last night. Whatever’s best for you. Just one tip though – make sure to eat the gloriously chewy pudding skin which will form on top of this after it’s set. Trust me on this one. You can thank me for it later.