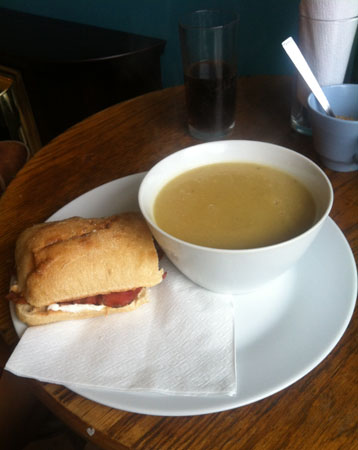 Hands up who’s skint. Well, that makes two of us. I looked at my bank account last week and let out a wail that could probably be heard across Merseyside. To add insult to injury, January looks to be the month where everything I own suddenly decides to break or run out. Eyeliner, jeans, PC hard drives, you name it. It’s like one long Monday where your bank manager has you on speed dial and you can’t afford to drown your sorrows in overpriced cocktails.

However, like the brave little soldier I am, I refuse to allow my straightened circumstances to stop me indulging in the odd lunch out every now and then. Thankfully, I’m lucky enough to work in an area of Liverpool where I’m spoilt for inexpensive lunch options, one of these being the recently opened 81 Renshaw Street.

81 Renshaw Street is an ‘arts cafe’, which opened with relatively little fanfare a few months ago. It’s the kind of unassuming little place you could easily walk past if you didn’t already know it was there. Like so many recent Liverpool openings, it’s decorated in ‘shabby chic’ (Christ I hate that term), so there are lots of old cabinets full of vintage crockery, rickety-looking tables, large squishy sofas and a gas fire that I’m sure my Nana June owned back in 1989. Where in other places this kind of ‘I’ve just accidentally wandered into a jumble sale’ style looks contrived, here it works – although this may just be because you can tell it’s there with no sense of irony whatsoever.

I had the soup and a sandwich, which consisted of a Streaky Bacon, Cream Cheese & Spring Onion sandwich and a large bowl of Sweet Potato and Chickpea soup. The sandwich itself was fairly utilitarian – two slices of crunchy streaky bacon and a large smear of spring-onion-studded cream cheese on a crunchy ciabatta roll – yet salty, creamy, crunchy and delicious. Plus, it wasn’t filled with any of the limp lettuce and watery tomato slices that can so easily ruin a perfectly good sarnie.

The real star of the show, though, was the Sweet Potato & Chickpea Soup. It’s always good when you see a simple dish done right, and this was as warm and welcoming as a bear hug. Hearty, slightly sweet and heady with toasty cumin, here was a soup that actually tasted of something, a delightful change from the bland fibrous mulch I’ve often had served up to me in other places. As a testament to how good it was, I overheard a woman at one of the other tables asking her waitress for the recipe, which she duly scribbled down. You don’t get that at Subway.

But woman cannot live on soup alone, so I decided to buy a slice of Flourless Clementine Cake for the road. Packed full of almonds and sour-sweet clementine peel, this was a squidgy slice of tasty complexity, and a cake that I will definitely be attempting to recreate in my kitchen sometime in the next few weeks. While I was there, I also had a sample of their Banana Bread in my mouth and didn’t instantly spit it out and cross myself. As regular readers will know, I deem bananas to be the devil’s own fruit, so the fact I managed to eat something containing them without wanting to wash my mouth out immediately with antiseptic is definite progress.

With its ramshackle charm, minimal web presence and really good homemade food, there’s a refreshing lack of pretence to 81 Renshaw Street. While its food is never going to win any awards for originality, it will win plaudits for being simple, tasty and full of heart. Plus, you can eat like a queen and get change from a tenner. And, in these times of economic hardship, you can’t really say fairer than that.